Graphs Say it All

In her Book; “Bank on Yourself”, Pamela Yellen talks about how having these kinds are policies take the roller coaster ride out of the picture. She offers the two graphs below to illustrate her point. On the left is the S&P 500 as it occurred from 1975-2015; 40 years. I was a stoke broker during the biggest crash in history; October 19th, 1987. (I actually began on Settlment Monday of the crash on the 26th). I had no idea what I had walked into. If you look at the graph below, that crash is hardly noticeable compared to the 1997 and 2007 corrections which appear huge by comparison. 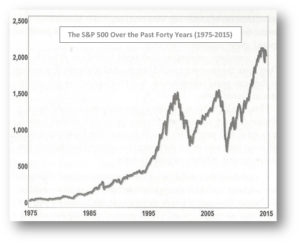 Pamela goes on to illustrate the growth pattern of her cash value in her Bank on Yourself policy over just 30 years. I quote “Recall that once credited to your plan, both your guaranteed annual increase and any dividends you received are locked in. They don’t vanish due to market corrections. Your principal is locked in, too.”

Which graph will allow you to sleep better at night?